A Gentle Introduction to Texture

Texture (a.k.a AsyncDisplayKit) is an iOS framework for smooth and responsive interfaces. It's main promise is making user interfaces thread safe. This means that the measuring and rendering of UI elements can now happen on background threads concurrently. The result:

a ridiculously fluid and performant 60fps UI with no lag or stutter, even with fast scrolling.

Although Texture is a mature framework in the industry, it is a little daunting to first-time users. It directly encapsulates UIKit, but it completely discards AutoLayout. It has a lot of its own rules (e.g. when is okay to access CALayer and when is not) which would make much more sense only after you have really understood the framework's logic. This article wishes to give a mild introduction to that logic and help beginner users wrap their heads around Texture's usage.

1. A little bit of history

Texture was formerly AsyncDisplayKit. It was the UI architectural framework empowering the Paper app of Facebook's. It was a game changer to the mobile engineering landscape, as Paper was one of the few apps that offers exceptionally smooth and fluid scrolling performance for feed.

The lead engineer at that time (2012-2014) was Scott Goodson. Before he joined Facebook, he was the #10 engineer on the iOS team at Apple, where he primarily worked on UIKit. Therefore, it is no surprise that he had formed a deep understanding of UIKit and its strength and weaknesses.

Later in 2014, Facebook open-sourced AsyncDisplayKit, and Scott remained to be the lead contributor to date. After he joined Pinterest in 2015, he and his fellow engineers contributed more than 70% of all the code in AsyncDisplayKit. In 2017, Pinterest decided to change the name to Texture, but still keep the project in the open source community.

2. Not your typical UIKit

The first thing we need to get straight is that Texture is a direct and complete replacement of UIKit. Although it is still using UIKit under the hood, we as the framework's users never directly work with UIKit components. We work with Texture components called nodes instead, since every UIKit component has a counterpart in Texture:

If you’re used to working with views, you already know how to use nodes.

All nodes' APIs are designed to be as similar as that of their UIKit counterparts. For example, just like you can do view.addSubview(subview), you do node.addSubnode(subnode) to add sub UI components.

The main advantage of using nodes over UIKit components is that all nodes can preform measurement, render layout and display concurrently.

"But wait... isn't it that UIViews and CALayers properties can only be modified on the main thread?"

Yes... and no, so here comes the Texture-specific rules:

The most important thing to remember about -init is that since it could be called on any queue, you should never initialize any UIKit objects, access node.layer.X or node.view.X, or add gesture recognizers inside.

Instead, you should do these operations in -didLayout, since it runs on the main thread.

Arguably the most important method is -layoutSpecThatFits. All layout code belongs to here (we will talk about layout in a minute). The fact that this method runs on background threads make Texture shine. With this method, texture calculates and renders the method concurrently.

However, you cannot modify layers and views in -layoutSpecThatFits. Instead, do them in -layout, which runs on the main thread, right after the layout has applied. This is a good place to put code like :

This is pretty much all you need to know to work with nodes.

Text node containers are also subclasses of ASDisplayNode. They also have APIs similar with that of their UIKit counterparts.

Although it is possible to use nodes directly on UIKit components, there are 2 main reasons why we should always use node containers when working with Texture.

The first reason is that since nodes are loaded concurrently, if they start loading only after they have appeared on screen (as UIKit does), their contents may flash on screen.

The second reason is the advantage of intelligent preloading, which we will talk about next.

There are 3 ranges of interface states:

This is most useful in UIs that involve scrolling. As is illustrated below:

With these interface states, the app knows what content to preload and what components to pre-render. When the user scroll too fast, the app would also know what contents to quit working on, and move on to load content of higher priorities.

Developers can also customize the app's behavior at each change of interface state with Interface State Callbacks:

A common practice in dealing with ASCellNodes with images is:

For the sake of performance, Texture completely abandoned Auto Layout and uses its own layout engine.

In Auto Layout, we imperatively lay things out.

Each line is equivalent to an immediate command that modifies the actual presentation on screen.

Texture's layout system adopts a declarative way of writing layout code. All layout code resides in 1 lifecycle method, and this method only:

Notice that this method returns an ASLayoutSpec. It is this ASLayoutSpec that dictates the layout on screen.

This means that along the way, we do not imperatively change anything. All we write inside this method serves as configuration to the ASLayoutSpec that gets returned.

To get a taste of what it means, let's try to write the layout for a ASCellNode that only contains a line of text with some edge insets.

Simple, right? Here, we are using an ASInsetLayoutSpec which is a subclass of ASLayoutSpec. We will discuss more of these specs, and how to configure them up next.

Arguably the most important layout spec is ASStackLayout, which is heavily inspired by CSS Flexbox. We use ASStackLayoutSpec in any situations where UI components are positioned in vertical or horizontal arrays. 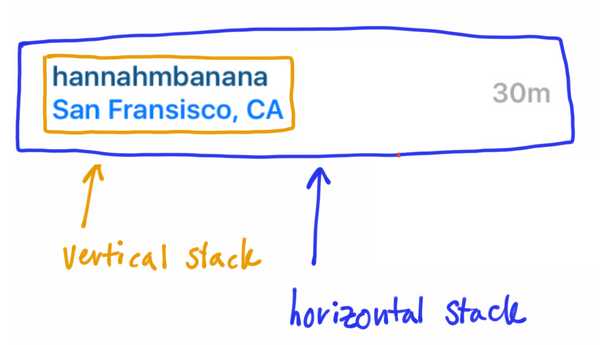 The usage and API of ASStackLayout mimics that of CSS Flexbox. First we declare the direction of the stack:

Then we put UI components to include in the stack into the children of the layout spec:

Next, like in CSS Flexbox, we define the alignItem property of the spec. You can tell the children to align at the start, center, end, or stretch across the axis:

Finally, justifyContent property defines how we want to deal with the space between and around our UI components. spaceAround puts all the empty space at the front and end of the children; spaceBetween puts all the space between the children. You can also stack things in the start, end or center of the available space, and set the spaceBetween property of the stack layout spec to your desired value.

Understanding ASStackLayout is a great start to using Texture Layout. There is a great official tutorial by Texture on different Layout Specs. Be sure to Check it out. Some extremely useful layout specs are ASInsetLayoutSpec, ASOverlayLayoutSpec, and ASBackgroundLayoutSpec.